Will Millennials Drive House Sales in 2013? 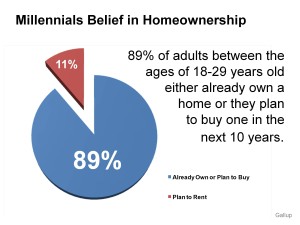 Millennials, The cover story of last month’s Barron’s Magazine, discussed the Millennial generation and the impact they will have on the economy including the housing sector. There have been many contrasting views about this age group and their feelings on whether or not homeownership is a part of their personal American Dream.

Here are few questions about this generation that have been debated over the last several years… along with some current findings.

Is the Number of Millennials Large Enough to Make an Impact?

“Millennials, sometimes called Generation Y, and defined by many demographers as ranging from ages 18 to 29 — make up the largest population cohort the U.S. has ever seen. Eighty-six million strong, it is 7% larger than the baby-boom generation, which came of age in the 1970s and ’80s. And the Millennial population could keep growing to 88.5 million people by 2020, owing to immigration, says demographer Peter Francese, an analyst at the MetLife Mature Market Institute.”

Do Millennials Even Believe in Homeownership?

There have been many recent studies showing this generation’s belief in homeownership is as strong as previous generations. Just last month, Gallup released a poll, American Dream of Owning Home Lives On, Even for Young, which revealed that 91% of young adults between 18 and 29 years old either own a home or plan to buy one. The report says:

What about Student Debt?

Barron’s explains the challenge may not be as crippling as some think.

“There is almost $1 trillion of student debt outstanding in the U.S. today, which could limit the purchasing power of Millennials…But, total figures are misleading. The average student loan among Gen Y-ers is $25,000, and the median loan is nearly $14,000, according to the Federal Reserve Bank of Kansas City. Less than 1% of student loans are larger than $100,000.”

Are They Ready to Leave Mom & Dad’s?

The economy forced many young adults to return home after college to live with their parents. Barron’s explains that, as the economy improves, this anomaly will correct itself:

“As the millennials’ employment situation improves, more young adults living at home will pack their bags and move out. That could spur an increase in U.S. household formation, which turned negative in 2007-08. Since then, the number of newly created households has recovered to about a million a year, still well below an annual average of 1.5 million since the 1970s, according to Census Bureau data.”

According to the latest CoreLogic Market Pulse Report, this correction is already occurring. They explain:

Will They Prefer Owning over Renting?

The Barron’s story gives a good reason why they might:

“Greater financial security could mean an increase in the birth rate, which typically slumps during economic downturns. Francese sees the average birth rate for U.S. women rising to 2.1-2.2 in coming years from a depressed 1.9 recently. ‘A lot of Millennials put off having babies, and now they will get to work,’ he says. That suggests they will also start buying homes.”

CoreLogic believes that the first time homebuyer is poised to return to the market this year. They explain:

“As new renter-households are formed, rental prices are bid up, making the prospect of owning more attractive to existing renters. Sustained low interest rates add to the appeal for current renters to convert to homeownership. The expectation this spring is that more renters will take advantage of historically low interest rates and low home prices to become homeowners.”

If you know someone who would appreciate the level of service and expertise that I provide, please contact me and I’ll be happy to follow up and take great care of them.