They will be hitting the streets starting this Saturday and Sunday. After this weekend, they will be operating on Thursdays and Fridays as well (hours of operation below.)

The company, founded by childhood friends Dan Cantelmo and John Yancigay, was founded in Patchogue in May and quickly expanded into Huntington and Northport.

According to the founders, the purpose of the cart service — in part — is to help free up parking spots in Long Island’s vibrant downtowns.

Qwik Ride works similarly to ride-sharing services like Uber and Lyft, where patrons can order a ride through the app.  However, with Qwik Ride carts, which can also be hailed down, the rides have no fee because the rides are supported by local advertising.

A tip is encouraged for the driver. 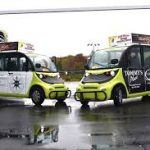 Qwik Ride’s will start its new venture in Port Jefferson with two street-legal Polaris Gem E6s — the six-passenger model– that are equipped with heat, as well as TVs, sound systems and lighting.

The goal is to have five carts operating in Port Jeff by spring.

Moving forward, the Qwik Ride owners say they’re working with the village to find distant parking lots from which to shuttle employees.

Qwik Ride carts will be driving passengers everywhere in the Port Jefferson Village zip code: 11777. The carts will be able to pick up and drop off residents directly from their own if they live within the zone.