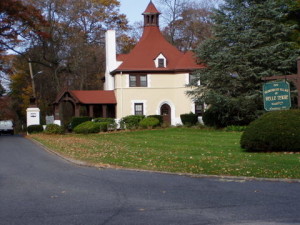 Dean Alvord, Belle Terre’s prince charming, came along in approximately 1903.  To him we owe the concept of Belle Terre, as well as its most beautiful architecture.  Son of a well-connected family in Syracuse, New York, Alvord moved to New York City for a career in real estate development.  His keen aesthetic sense drew him to the “City Beautiful” movement, New Yorkers having realized that buildings could be beautiful as well as utilitarian.  Alvord first won fame with his creation of Prospect Park South, a housing development in Brooklyn.  Luxury homes in varying styles of architecture were required to be set back from the street to allow for large front lawns, utility lines had to be buried, and meridians filled with greenery were essential to beautify his development.  These homes, now restored, have today become prime real estate.  Prospect Park South was followed by the equally successful Roslyn Heights in Nassau County, to this day an upscale community.

As one reporter put it, however, Dean Alvord’s heart belonged to Belle Terre.     In 1902 he was one of the five directors of the Port Jefferson Company which purchased Oakwood from the Strong family for the purpose of development.  Successful at attracting investors, Alvord was chosen president of  Belle Terre Estates, incorporated in 1906.  It was in Belle Terre that Alvord built a home for himself which he named Nevalde and into Belle Terre (French for “beautiful land”) that he poured all his resources and his passion for architecture,  nature and for life on a grand scale.